You may have  noticed some significant changes on holes 13 and 17.  We thought we would provide an explanation of the work being done.


We were continuing to experience big problems with 17 bunker following torrential rain events.  Rain runoff; which collects in the valley stretching from the 4th fairway and through #1, eventually makes its way to 17.  Previously, the path into the pond took all the sheeting water directly over the corner of 17 green and  through the bunker.  This water obviously causes tremendous damage to the bunker but also deteriorates the pond's rock wall.  We had just repaired this bunker in 2010 and wanted to take measures to prevent this from happening again.


Our strategy was to build a terrace which will direct runoff into drains and around the bunker in a different direction towards the pond.  Once the terrace is finished it will be sodded.  The bunker has been completely excavated and we will be installing new drainage along with the liner system we installed on holes 13 and 16 last fall.  The improved performance should be dramatic the next time we get an extreme downpour.


We are also making a similar change to the drainage stream on 13.  This stream collects runoff from Southwest 14th street in addition to the golf course.  The problem was similar to what we were experiencing on the 17th and the solution is the same.

We received .75 inches of rain on Friday the 13th and 3.5 inches Saturday night into Sunday morning.  (Two inches of rain fell in twenty minutes Saturday evening.)  Also included was small hail along with high winds.  Apart from the bunkers we were very lucky - no significant tree damage.

The bunker; pictured below, is to left of 13 green which has the new bunker liner & performed very well, the bunker in the background (right of the green) does not. 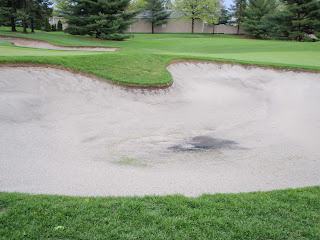 Number 17 bunker is featured next with complete devastation. 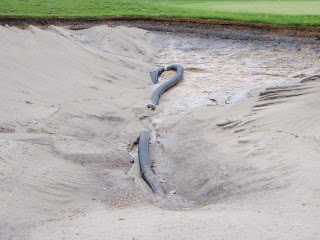 We should have the bunkers back in playable condition by the end of the week.  The bunker on 17 and the left bunker on 5 had extensive damage and will require much more work.  Repairs for these bunkers are on approximately a two week timeline. 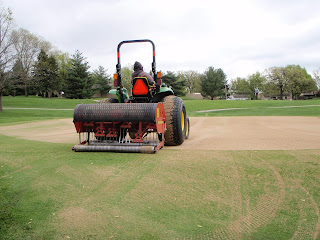 We are also aerating greens this week.  Holes 1-9 were completed April 16 while 10- 18 should be done today.  This aeration is the 1/2" diameter deep, solid tine.

We are experiencing some "cold" weather this morning.  The high temperature is forecast at a mere 65 degrees while the low has dipped to 37.  The light frost we are experiencing this morning is normal for this time of year- our average daytime highs are typically around 60 with lows in the upper 30's.  This morning's frost has almost come as a shock to the grounds crew.  We have been experiencing record temperatures off and on since last fall and the weather this spring can only be described as extraordinary.

By most estimates the golf course is approximately six weeks ahead of schedule in terms of green- up and turf growth.  It has been a struggle just to keep up with mowing, and frankly, we were falling behind.  It is with great relief that we welcomed back our seasonal maintenance staff on Monday, April 2nd.  We have made significant progress since their return.  We have installed some drainage, applied crabgrass preventatives, performed irrigation repairs, and are starting to catch up on mowing. 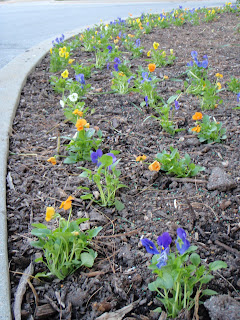