Our seasonal grounds maintenance staff returns April 1st. We always anticipate the return of the extra help but this year we are especially glad- Mother Nature keeps giving us small doses of winter!  The first order of business will be to clear the course of sticks and leaves.  We will also be working on repairing culverts in the creek on holes 13 and 5.  Below are a few pictures from Tuesday. 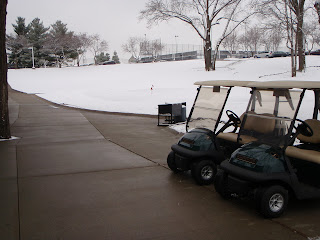 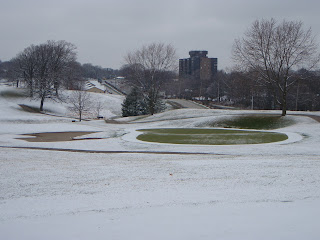 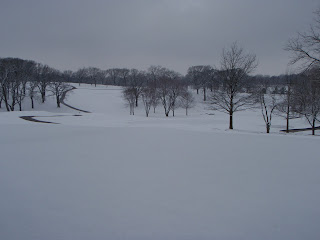 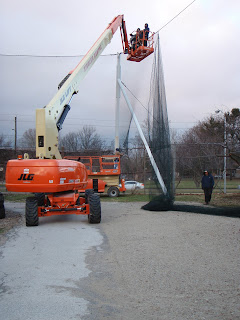 The net has been installed and the driving range is open for practice.  Our staff worked extra hours on Monday and Tuesday during more favorable weather to ensure the range could be opened Wednesday. 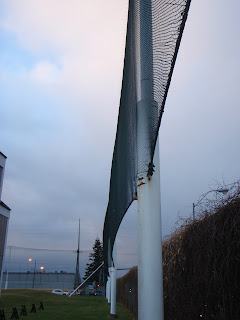 The tee has been mowed twice and is in good condition to start the season. 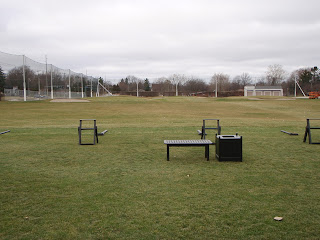 The weather this week has restricted our efforts on the course.  We are using the cold/ rainy days to finish some projects in the shop.
Posted by John Temme at 8:36 AM

We are pleased to announce that the golf course will open Thursday March 17th.  Those who wish to play can walk the course beginning at 8 AM- carts will not be allowed until further notice. 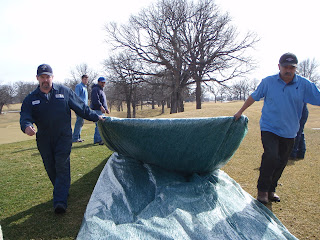 The protective covers have been removed from the greens and we have also rolled and mowed the greens once.  The sunny, breezy weather is helping to dry the golf course. 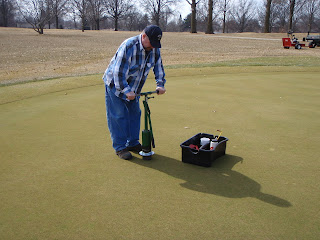 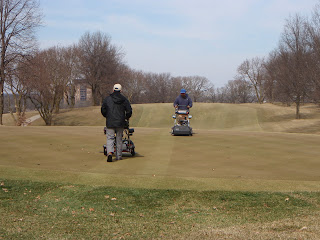 The course came through the winter in excellent condition.  There is no winter injury or snow mold on any of the greens, tees, or fairways.  You will notice many sticks and leaves throughout the property.  Please be patient- it will take time to clean the course.  We will make significant progress beginning in April when our seasonal staff arrives. 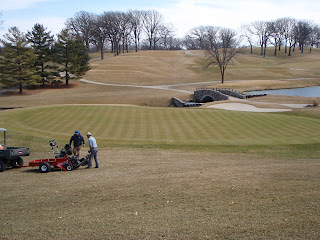 We are hoping to install the net along the driving range next week.  The determining factor will be the weather.  The process takes 4 men 4 days to complete in good weather.  It is unsafe to operate the large lifts needed for the task if the weather is too rainy or windy.  Once the net is up we will open the practice tee.  Please continue to use the indoor facility located at the west end of the range.
Posted by John Temme at 2:52 PM

Ben Hansen will be joining us this year for his summer internship, here at Wakonda. Ben is also coming down from Ames, Iowa to help us during his spring break and on days he does not have class. His responsibilities will be general ground maintenance, topdressing and chemical applications.

Ben currently lives in Ames and will be making the commute to work everyday. In his spare time, Ben enjoys golfing, hunting, fishing, riding dirt bike and street bike. He attends every home, Iowa State, football game and participates in intramural events such as Euchre and softball tournaments. 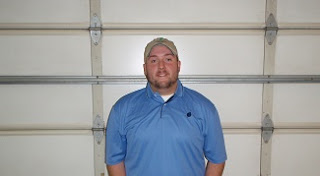 Assistant Superintendent Shawn Fopma has been on the staff for one year. Shawn was hired last spring as an intern, and was offered a full-time Assistant's position following the internship. Shawn's main responsibilities include working with current interns and helping Assistant Jim Sedrel supervise the seasonal maintenance staff. He is also leading our environmental effort by handling our IPM Planning Guide and Audubon certification.

Shawn currently lives in West Des Moines. In his free time, he enjoys playing golf and basketball with his friends. He is also an Iowa football season ticket holder and attends many hawkeye wrestling meets. 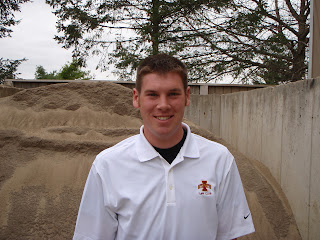 The arduous task of pruning the trees at Wakonda has been completed- at least what can be done from the ground using a telescoping chain saw.  We started pruning between Christmas and New Year's and took advantage of every break in the weather to get on the course - see our blog from 12/30/2010.  Nearly two months and 1,300 trees later we were finally finished on February 23rd.  Once we were done much of the course mimicked the scene near the 13th tee. 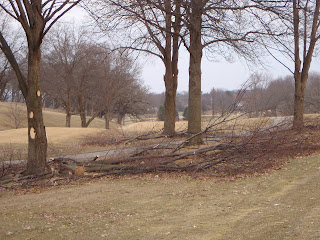 As soon as we finished pruning we had an opportunity to start chipping.  Since the snow had thawed and the ground was frozen hard we were able to drive our truck and chipper out on the course and chip the branches where they lay.  This process was much more efficient than waiting for spring when the ground is too soft for a heavy chipper to drive throughout the rough.  Under these conditions the chipper remains stationary and every branch must be cut to shorter length and transported to the chipper- much more time and labor. 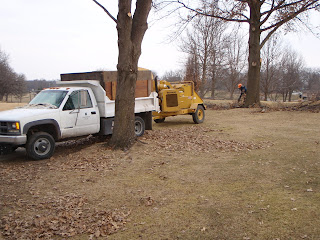 Here is a picture of our rig hard at work.  We are very fortunate to own a wood chipper. 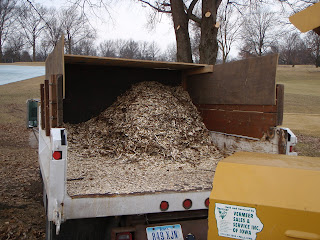 We estimate that we filled our chip box 30 times.  The work was hard- it took us 7 days of solid chipping from February 24 to March 4. 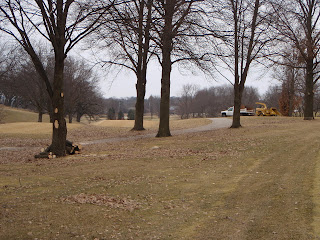 The end result puts us ahead of schedule for the arrival of our seasonal staff.  We will pick up the large firewood size logs this week and when our staff arrives in April we will be hand- raking the small sticks strewn throughout the property.
Posted by John Temme at 8:30 AM

Assistant superintendent Jim Sedrel has been with the Wakonda Grounds staff for 2 years.  Jim has many responsibilities which change throughout the year but his main focus is the supervision of the seasonal maintenance staff.  Jim helped start the Wakonda Grounds Blog last spring and has authored many of the postings to date.

Jim is originally from Oskaloosa, Iowa and holds a degree in Horticulture from Iowa State ('05.)  Jim brings twelve years of golf maintenance experience to Wakonda.  He has worked at several courses throughout the state of Iowa and others around the country.  Notable stops along his journey have included:  Bellerive C.C. in St. Louis, Exmoor C.C. in Chicago, and Pinehurst Resort in North Carolina. 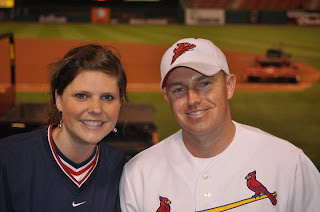 Jim resides in Windsor Heights with his wife of 4 years Vanessa.  His interests include Cyclone sports, Cardinals baseball, and trout fishing.
Posted by John Temme at 7:59 AM

Maintenance technician Beto Ramirez has been employed with the grounds department for 9 years.  He mastered all aspects of golf course maintenance and became a full- time employee in 2008.  During the winter months Beto takes care of all equipment washing and refurbishes everything from flagsticks to trash cans.  During the summer months you can notice Beto's work on our green cleanups.  He is the very best at a cutting a precise edge. 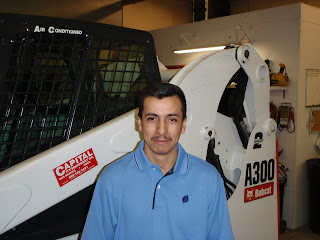 Beto lives in Des Moines with his wife of 9 years Raquele and daughter Stephanie (7).  He is originally from Michoacan, Mexico and is a fan of the Chivas, a professional soccer team in Guadalajara.  Beto has a good portion of his extended family living in the Des Moines area and enjoys spending time with them.  Beto's father- in- law, Antonio Berber, is also seasonally employed with the grounds staff.  Antonio is responsible for maintaining the flowers throughout the club.

Beto's favorite hobby is bicycle riding.  He enjoys the warmer months when he can ride the bike trails with his wife and daughter.
Posted by John Temme at 7:38 AM