USGA agronomist Ty McClellan made his annual visit on Tuesday, August 10th. Ty spent the afternoon touring the course with John Temme, Dave Schneider, Jeff Courter, and several members of the green committee. Mr. McClellan's visits are always educational and are enjoyed by the management team and members alike.

The comments we received were very encouraging. Ty stated that Wakonda's greens are as good (or better) than any others he has visited this season. He commended the membership for their willingness to take the necessary steps to create such fantastic putting surfaces. Ty claimed that our fairway and rough damage is typical of other courses he has visited but that Wakonda is doing much better than average. Collars are also performing better than average with stress evident in a few areas. Topics of concern that were discussed included bunkers and drainage- not surprising given this season's weather. Ty said to be patient for recovery of weak turf until optimal growing conditions return in Autumn. We expect Ty's full report, including his recommendations sometime in September. 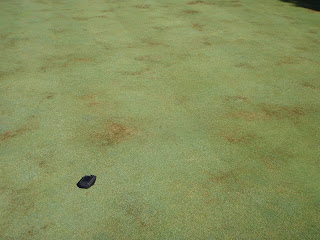 A comparison of two greens. Old 9- with old bentgrass varieties and a lot of struggling poa is pictured above. Below is a shot of the turf on new 9 green- there truly is no comparison. 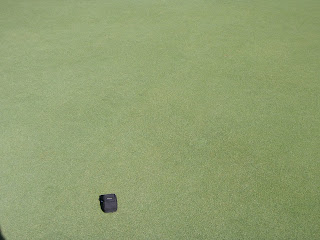 The weather has improved this week. With a break from thunderstorms and lower temperatures, the grounds crew has taken several steps forward in the recovery process. We have been replacing sod on the 8th fairway and in a few small locations on the collars. Fairways were fertilized on Wednesday. The added fertility will help ensure a flush of growth this fall which will help the turf return to top condition. 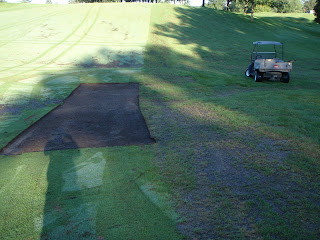 You may have also noticed man in a lift pruning trees. We rented the lift for two weeks during which time we are primarily removing dead, hanging branches left from this year's tumultuous weather. 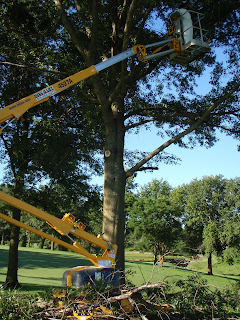