Early Sunday morning we were hit by a severe thunderstorm. Local news reported winds in excess of 70 MPH. We received 1.5 inches of rain very quickly. Bunkers are washed out... again. We had many branches blown out of trees. One tree on the 5th hole was blown over completely and several others received enough damage that they may have to be removed. Some fairly impressive damage can be observed around the driving range. The fence to the south of the range along Watrous was nearly blown over with the posts being bent near the base. The fence along the south side of the tennis facility was also badly damaged. The grounds crew will have a busy week cleaning and repairing the course in the wake of this summer's latest storm. 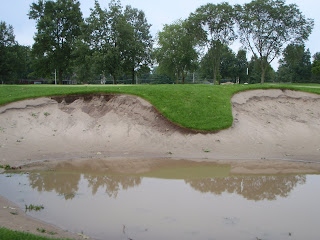 The bunker in front of 12 green. This scene has repeated itself entirely too frequently this year. 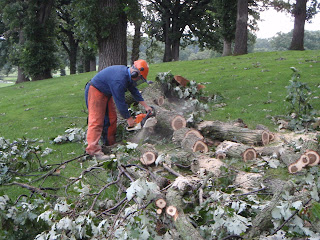 Two large branches are being cleaned up to the east of the 1st fairway. 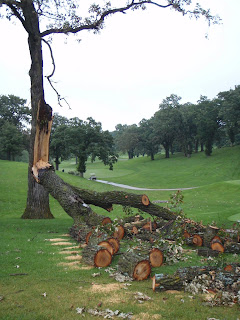 This tree is located between 3 green and 4 tee. The tree was split in half by the high winds. 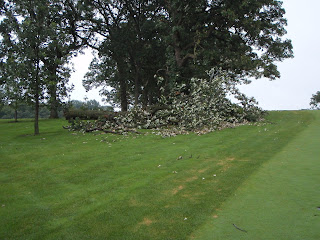 This is a picture of the Oak that was blown over on the 5th hole. 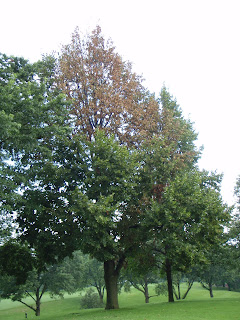 This tree was hit by lightning approximately a month ago. It is located near the red tee on the 7th hole. We posted a picture of the trunk of this tree in an earlier blog posting. Notice the foliage that is dying where the lightning struck. We will keep an eye on this tree, hopefully it will survive.
Posted by John Temme at 4:04 PM